An Interlude with Bette Davis by Camilla Carr, starring Morgana Shaw with Special Narration by Robert Wagner, a friend

DUE TO COMPLICATIONS RELATED TO COVID-19 RISK RATING INCREASES, JULY AND AUGUST SHOWS HAVE BEEN CANCELLED.

STAY UP TO DATE ON UPCOMING SHOW DATES HERE! ONSTAGENTX
May 28, 2022, Bette Davis should have sung Sondheim’s “I’m Still Here”—it was her kind of number. The formidable actress of Hollywood’s Golden Age made a career of playing strong women who wanted their way, no matter how hard the fight. “Fasten your seat belts,” she warned her friends (and husband) in All About Eve (1950). “It’s going to be a bumpy night.” But there was never much doubt about who’d be standing when the weather cleared and the dust settled—at least in the movies.

BROADWAY WORLD
May 24, 2022, Robert Wagner to Narrate ALL ABOUT BETTE: AN INTERLUDE WITH BETTE DAVIS, Wagner met Bette Davis in the early 1950's. They worked together on his Golden Globe nominated television series, "It Takes a Thief," in and again on "Madam Sin,"

DALLAS VOICE
May 19, 2022 , Actor Robert Wagner joins Morgana Shaw with narration in All About Bette

FOCUS DAILY NEWS
May 5, 2022, The complete interview by JoAnn Holt with Morgana Shaw including Q&A in Focus Daily News

PHOTOS FROM WOMEN TEXAS FILM FESTIVAL
All About Bette star Morgana Shaw was an invited guest to walk the red carpet and give interviews for the Second Annual Women Texas Film Festival, Dallas, Texas, August 2017.

SELIG FILM NEWS
All About Bette – An Interlude with Bette Davis by Camilla Carr has made its way across DFW over the last few months playing in three theaters. Along the way Morgana Shaw has had the chance to highlight her talents in the one-woman show that dives into the world of Bette Davis. The play pulls a reverse Benjamin Button as we are introduced to an octogenarian Bette and travel with Morgana to a young vibrant twenty-some Davis. Carr's honest and biting look at the fearless Bette Davis unveils some fun rumors that have stuck with the ladies and gents of the golden age of Hollywood. Morgana pulls a visual transformation with the opening sequence of the aged icon talking directly to us the audience and her constant connections back to us make for some wonderful moments. Shaw fully immerses herself into Bette from the get go as she torments us the audience for our lack of quality attire, unlike her beautiful gown. GADI ELKON

SHARP CRITIC
Camilla Carr’s All About Bette is a one-woman show that turns on the meticulous, focused, inspired performance of Morgana Shaw. Beginning with Bette Davis in her twilight years, she arrives with silver-white hair, moving a bit slowly, but still as fierce as ever. She starts by mentioning that Edward Albee only granted permission to Warner Brothers for Who’s Afraid of Virginia Woolf? because he was promised that she and James Mason would play Martha and George. Had this come through, her famous “What a dump.” line would have featured Bette Davis doing Bette Davis. This delicious irony launches Ms. Davis into an avid, detailed, beguiling succession of anecdotes, punched up with juicy gossip and grand moments, such as a few bars from her famous song, “A Letter to Daddy” from Whatever Happened to Baby Jane? Roughly halfway through the show, there’s a riveting sequence of transformation. She removes the wig to reveal a damp mop of brunette hair, which she brushes out to reverse time by about 30 years. CHRISTOPHER SODEN

THE COLUMN
A one person show is extremely difficult to do. You have to carry the entire show yourself, you must possess the dynamic stage presence and acting craft to hold the audience’s attention for an entire show. Now add to that almost impossible feat you also have to portray with complete conviction and honesty one of the greatest actresses in film history. Shaw succeeds in all those challenges with extraordinary and mesmerizing success. Morgana Shaw is indeed all fire and music! JOHN GARCIA

SOCIAL WHIRL
Shaw’s performance as “Bette” has left audiences breathless. “It’s an honor to play this legendary icon, to bring her to life and share the complete person with the world,” said Ms. Shaw. When asked what she likes most about Ms. Carr’s script, she emphatically said, “Looking into Bette’s heart. She was a strong woman, but the documentaries rarely show you the love she had for her family.”

CULTURE MAP DALLAS
Dallas native Morgana Shaw has straddled mediums her entire career, slipping from television to film to theater with ease. You might recognize her as Jim Carrey's mother from I Love You Phillip Morris or as the brothel madam Mab from the WGN series Salem. Or perhaps you saw her as the manipulative queen Fastrada in Theatre Three's Pippin, the leather-clad rock icon Billie Trix in Uptown Players' Closer to Heaven, or the betrayed wife in L.I.P. Service's excellent The Goat or, Who Is Sylvia? just last year.
There's also a good chance you've seen her portray a legendary screen icon in Camilla Carr's one-woman play All About Bette: An Evening with Bette Davis. It's had two productions at Theatre Three already, and is now embarking on a Dallas-Fort Worth tour that starts June 8-10 at the Margo Jones Theatre in Fair Park. LINDSEY WILSON

ART AND SEEK
With thrusted chin, stretched mouth, head flung back and constant hair tousling, Morgana is equally believable as Bette, young and old. She swings her arms, swirls her body and clicks her heels across the stage. She owns the stage and fills the space. Morgana is never out of character, regardless who that character is. The stage is set credibly with just enough props to be convincing: an open trunk for changing clothes and characters, a mirror, a podium and of course, an ash tray to stomp out the ubiquitous cigarette. GAIL SACHSON

THE DALLAS VOICE
"The flinty glow from a Marlboro Menthol is the only illumination, then shards of lightning briefly frame the figure. Our glimpses are glancing, but definitive: The silhouette, the bangs, the pursed lips, the hat — that hat! Then a croaking delivery that can only come from one person. “Aren’t there any gay men in the audience?” For these few moments, you’d bet the farm that it’s Bette Davis come back to life. But actually, it’s better. We get Morgana Shaw, massaging, interpreting, embodying, modulating the notoriously prickly, and just as famously brilliant, Warner Bros. actress — until Meryl Streep, the consensus pick for the finest film performer ever, and even post-Meryl, Hollywood’s most iconic movie star. Those are huge heels to walk into, yet Shaw does it to perfection. She looks every day of the 81-year-old Davis, at the end of her career and life, giving what seems to be one final performance to the gape-mouthed delight of the 60 gathered audience members at the Margo Jones Theater in Fair Park’s Magnolia Lounge."    ARNOLD WAYNE JONES jones@dallasvoice.com

THE FLASH LIST
Bringing to life the legendary Oscar-winning actress who dazzled big-screen audiences for more than six decades, local actress Morgana Shaw now portrays Bette Davis in the currently-touring show All About Bette. A hit at the Spoleto Festival in Charleston, South Carolina, the work also received both Best Performance and Best Play awards at Bogata's Iberoamericano de Teatro, (the largest theatre festival in the world). Less about cheap character imitation or exaggerated television drama and more like an in-depth personal interlude, the one-woman play written by Camilla Carr delves below the surface for an insightful look into the woman considered to be one of the greatest actresses of all time. The Flash List caught up with Morgana Shaw for a quick conversation as she was finishing up a promotional photo shoot complete with fitted vintage dress, classic Hollywood hairstyle, and vodka-filled martini glass. SHERRI TILLEY

THEATER JONES
"Midway through the first act, Shaw’s Bette pulls her dark velvet coat close to her and begins to talk about her four husbands, and how social norms of the time drove her to marry injudiciously. “I married people I shouldn’t have gone to dinner with,” she says, laughing and sighing at once.

Then the lights dim and Shaw steps behind a huge trunk at the rear of a nearly bare stage. She emerges seconds later transformed from an old woman in a wig and vintage finery to a gorgeous girl with a heavy mane of red hair dressed in a russet taffeta gown, her eyes and hair and dress all shining in the light. Voila! Bette is here in her heyday. She lights a cigarette and exudes glamour...

The show takes us from Bette’s beginning to end, literally, and runs almost two hours, including a 15-minute intermission. Shaw’s Bette gives us a sense of Hollywood’s Golden Age, and a bright glimpse of one of the toughest and most talented actresses that made it shine. We exit the theater with a little stardust settling in our memories." MARTHA HEIMBERG

BROADWAY WORLD
Morgana Shaw succeeds in the uphill battle of captivating a crowd without another actor on stage. Her ability not only to memorize two hours worth of dialogue, but to transform herself through multiple decades and varied characters is worthy of high praise. She and director Ryan Matthieu Smith have creatively crafted an endless array of dramatic scenes with barely a prop or scenic element on stage.

An award-winning veteran of theatre, film and television, she is happy to be back on stage as Bette Davis in the role she originated in 2006.

END_OF_DOCUMENT_TOKEN_TO_BE_REPLACED

“It brings me great pleasure knowing that Morgana will be interacting with my voice for years to come. Camilla’s script is filled with Bette’s attitude and spirit, and Morgana dives deeply into her character. Bette’s legacy is in good hands... I’m happy to be a part of this production.” - Robert Wagner

END_OF_DOCUMENT_TOKEN_TO_BE_REPLACED

DAVID ANDREW NELSON (Producer) is an award-winning designer and screenwriter

END_OF_DOCUMENT_TOKEN_TO_BE_REPLACED

Ken is a producer, director, writer and actor in Dallas/Ft Worth.

END_OF_DOCUMENT_TOKEN_TO_BE_REPLACED

Joy is a Dallas/Ft Worth based photographer and stylist.

END_OF_DOCUMENT_TOKEN_TO_BE_REPLACED 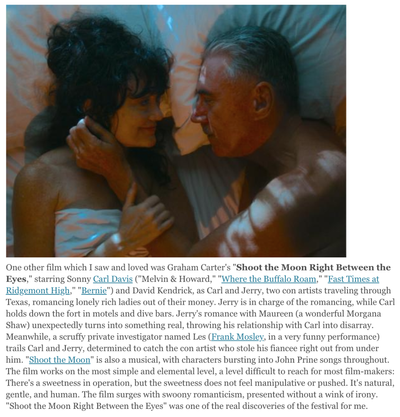 Review - Shoot the Moon Right Between The Eyes

Review of the Memphis Film Festival screening of the charming and sweet SHOOT THE MOON RIGHT BETWEEN THE EYES, starring a "wonderful" Morgana Shaw. 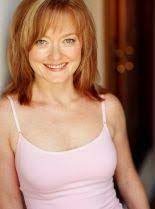 For these few moments, you’d bet the farm that it’s Bette Davis come back to life. But actually, it’s better. We get Morgana Shaw, massaging, interpreting, embodying, modulating the notoriously prickly, and just as famously brilliant, Warner Bros. actress — until Meryl Streep, the consensus pick for the finest film performer ever, and even post-Meryl, Hollywood’s most iconic movie star. Those are huge heels to walk into, yet Shaw does it to perfection. ARNOLD WAYNE JONES

ALL ABOUT BETTE: An Interlude with Bette Davis by Camilla Carr, starring Morgana Shaw with Special Narration by Robert Wagner, a friend